Redwoods: The Tallest Trees In The World 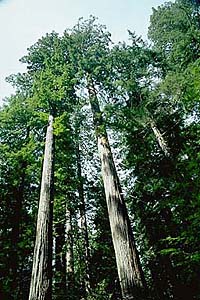 The tallest tree in the world, a California redwood, stands 379 feet (116 m) tall, or slightly taller than a football field is long. Redwoods of the past that have since been cut down probably stood even taller, and may even have reached the theoretical maximum height for trees.
Indeed, there is an upper bound.
Two main opposing forces affect a tree’s height; one pushes it upward while the other holds it down. By analyzing the interplay between these forces, a team of biologists led by George Koch of Northern Arizona University calculated the theoretical maximum tree height, or the point at which opposing forces balance out and a tree stops growing. This point lies somewhere between 400 and 426 feet (122 and 130 m).
On the one hand, the researchers found, trees in forests “desire” to grow as tall as possible to overtake neighboring trees and reach stronger sunlight. On the other hand, gravity makes it more and more difficult to haul water upwards from the roots to the canopy as the tree grows, and leaves thus become smaller near the top.
When, at a certain height, leaves (or, in the case of redwoods, needles) are not cost-effective — the energy they rein in through photosynthesis doesn’t pay for the energy it costs to bring them water — then the tree stops growing. [Read: Why Are Tree Rings Lighter or Darker?]
“As trees grow taller, increasing leaf water stress due to gravity and path length resistance may ultimately limit leaf expansion and photosynthesis for further height growth,” the biologists wrote in a 2004 article in the journal Nature. This limit lies at or just above 400 feet.
Many factors account for the extreme height of redwoods, including the temperate Northern California climate, nutrient-rich soil, abundant rainfall, fog and even the tightly-packed redwood forests, which force trees to shoot upward in pursuit of sunlight. These conditions combine to make redwoods not simply the tallest trees in the world, but by Koch’s and his colleagues’ calculations, almost as tall as they could possibly be.
This article was provided by Life’s Little Mysteries, a sister site to LiveScience.com. Follow Natalie Wolchover on Twitter @nattyover.
Tags:
Redwood
redwood trees